Lenore, Over at Lenore Diane’s Thoughts Exactly recently acquired a beautiful creature, Andy, through a White Elephant Gift Exchange.  There was some discussion about whether Andy was an aardvark or armadillo.  When I commented on her “White Elephant Exchange Gift” post, I referred to Andy as an armadillo.
I expressed that I had been looking for an armadillo, whom I would name Armando, and he would travel the world visiting bloggers and having adventures.  Lenore, gracious buddy that she is, offered to send Andy to me for a visit.  In exchange, I agreed to take him to the Armadillo races held each year in LaBelle, Florida so that he could see some of his speedier relatives.
Andy arrived in Florida on Tuesday and has since spent some time getting to familiarize himself with Casa K8edid.  Today, he accompanied me to work, where he set about increasing his knowledge base and working on solving the Rubik’s cube, which he plans to incorporate into his stand up comedy gig. 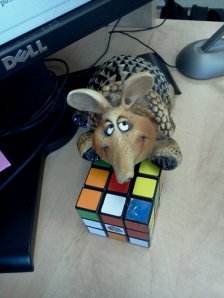 Despite his lack of opposable thumbs, Andy is determined to learn to solve the Rubik's cube. 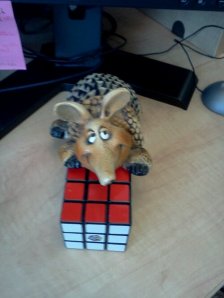 After work, Andy and Shelby had a little play time. 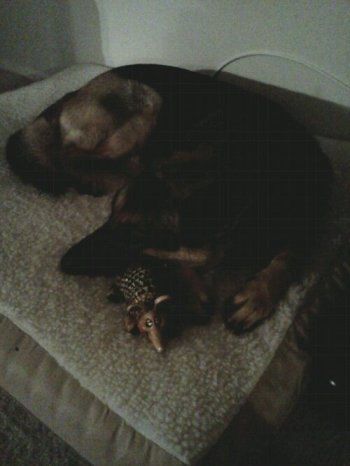 When it was time for lights out, Shelby and Andy settled down nicely.  Andy will spend a few weeks with us.  If you are interested in hosting Andy and showing him some of the sights and sounds of your city, contact Lenore Diane directly.
This weekend, Andy will make his way to Miami…we’re looking for a bathing suit for him, but he is hard to fit…..

Filed under General Mumblings, humor, Photos - Travel and Other, Uncategorized