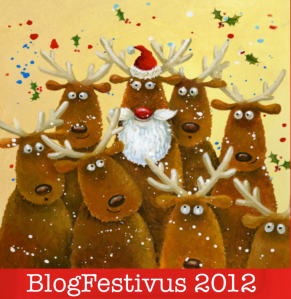 “Have a seat, Dancer” Sheriff Kringle waved at the empty chair across the desk from his own.

“Name’s Dasher, Sheriff.  Why’d you bring me in?”  Dasher lowered himself into the office chair, resting his hoofs on the cluttered desktop.

“Dasher, Dancer…whatever.  See this?”  Kringle tossed a photograph across the piles of paperwork.

“Yeah.  That’s us.  The Reindeer of the Icelandic Antler Club,” Dancer handed the photo back, avoiding the Sheriff’s eye.

“Well, as you can see…there are only eight reindeer. Everyone knows there are nine reindeer.  Nine.”  Kringle pulled slowly on his fluffy beard.  “I don’t know what kind of shenanigans are going on out at my brother’s place.  Kris ain’t ever been right.  The pressure.  It gets to him, especially this time of year.  But we’ve got us a missing reindeer and I’m determined to get to the bottom of this.”

“Santa has been a little overwhelmed…”

“Overwhelmed, my ass. He’s been drunker than a skunk since January” the Sheriff snorted.

“He takes a nip now and again,” Dasher admitted. “I’m sure there is a logical explanation.”

“Caribou crap.  Rudolph must’ve knocked one of you off to get a permanent spot on the team.  You all look alike, but I’m going to figure out which one is missing and what happened.  You might as well tell me what you know,” the Sheriff’s gaze was intense, his fingers drumming the desk.  “Start talking.”

Dasher scratched his antler and shifted nervously in his seat. “Well…”

Join these other bloggers to see their entries in the BlogFestivus Seasonal Short Story Contest:

Blogdramedy – The Hostess with the mostest

Rewind Revise – newly married and on her very own joy train.

Lenore Diane — thoughts from the Elf Queen herself.

Shouts from the Abyss – Tom’s on a mission to blighten your holiday season.

Fix it or Deal — Amy Severson bringing it robot-style.

So I Went Undercover — she’s undercover and that’s all I’ll say about that.

MC’s Whispers – Maria-Christina works in PR. What kind of “spin” will she put on this writing challenge?

Blog It or Lose It! – One word. Minecraft.

Voice in Me — Reena’s from India…where reindeer go on vacation.

A Year of Daily Posts — Sarah, the paperback writer (three manuscripts but they count.)

Diary of a Sensitive Soul — Immie, blogging from the U.K. (Why am I feeling Bruce Springsteen?)